The instruments of the Varanasi observatory

(Acknowledgements : The work involved here, of getting to know the details of the Jantar Mantar observatory instruments at Varanasi Manmahal became possible as a part of a collaborative project between the Nehru Planetarium, Nehru Memorial Museum and Library and the National Science Center, Delhi, of working for outreach related to the observatry at Varanasi)

The Manmandir observatory in Varanasi, was constructed by Sawai Jai Singh early in the 18th century, on the roof of the Manmahal, built earlier by his ancestor Sawai Mansingh, in the 17th century. As the observatory was built on a preexisting construction which did not have cardinal (North-South, East-West) alignments, the instruments themselves which necessarily had to have cardinal alignments, are placed neither parallel nor perpendicular to the boundary walls and are inclined at a small angle with respect to these boundary walls. 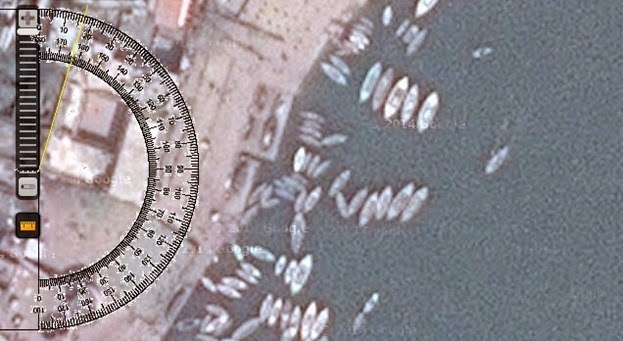 A satellite image of the Manmahal area with the Manmandir ghat in the view (Image screen capture from wikimapia.com)

As can be seen in the satellite image above, with a transparent protractor overlaid, the walls of the Manmahal, which running parallel to the river at this point, are inclined by about 17 degrees from the North direction. All the instruments will have either wall inclinations or the zeros of the markings, inclined by this amount, with respect to the boundary walls.

The scale of this observatory is much smaller than the observatories of Jaipur and Delhi, while comparable to the Ujjain observatory. There are five main instruments in the observatory. In addition, there are some unidentified structures which may have had astronomical and/or construction related connotations.

The five main instruments are:

There are two of these instruments in the observatory. The dimensions of the instruments were measured by V. N. Sharma (Sawai Jai Singh and his Astronomy, V. N. Sharma, published 1995 by Motilal Banarsidas ) are tabulated here:

The instruments, currently, have dual markings for time, the Indian units of divisions into ghatika (24 minutes) and pala (24 seconds) engraved on the sides of the quadrant, and the western units of hours and minutes as the main markings on the face of the quadrant.

The large Samrat Yantra seen from the South East

The small Samrat Yantra seen from the South

The triangular wall is aligned in the North-South direction.

The inclination of the triangular wall should be such that the angle between the base and the hypotenuse in the triangle is equal to the latitude of the location which is 25°18'27"N 83°0'38"E.

A simple method for demonstrating the wall inclination

With such an inclination, the hypotenuse becomes parallel to the axis of rotation of Earth. At night, if one stands at the base of the instrument and looks up along the inclined wall, one should be able to see the Pole star (Dhruv tara) in that direction. Of course, the very intense light pollution in that area might make it difficult even to view the Pole star, most times. This needs to be tested on a cloud free night (which is hoped to be undertaken in the next visit). The quadrants being perpendicular to the wall inclination, then become parallel to the equator of the Earth, thrown up into the sky – the Celestial Equator.

Why is the instrument built with such a specific inclination and structure?

Sundials with such equidistant markings, where the relevant shadow moves parallel to the Celestial equator, are known as Equal Hour or Equinoctial sundials. The Samrat Yantra is one such, innovative, equinoctial sundial. The quadrants of the Samrat Yantra encompass six hours of time. With Sunrise, the shadow will be at the very top of the western quadrant and the sundial time then is 6 AM. The shadow moves down the quadrant and disappears at the junction of the quadrant and the gnomon, at 12 noon, sundial time. The shadow reappears at this time, on the eastern quadrant and climbs to the top of this quadrant by sunset – 6 PM, sundial time. The sundial time can then be read of in some equal divisions of these six hours on either quadrant, depending on the time of the day.

The sundial time, however, differs from the clock time and there is a correction factor for this which changes every day. The correction factor arises from two contributions – 1.) The ellipticity of Earth’s orbit and the tilt in the axis of rotation of the Earth with respect to Earth’s orbit makes the apparent motion of the Sun in the sky appear faster at times than the others – the correction arising from this could be positive or negative on different dates of the year. 2.) The second correction, which will be a constant factor, arises because the sundial tells solar time specific to that longitude, while the civil time, artificially, keeps the same time for a range of longitudes. After applying these two corrections a table could be prepared giving the correction factor for each date in the year. Such a table should be displayed in the observatory, or, alternately, as is done at Jaipur, the table could be with the observatory staff and they could display the appropriate correction for the day, for the visitors.

In addition to telling the time, the Samrat Yantra could also be used to measure Declination (angle away from the Celestial Equator) of the Sun or any other celestial object. The scales on the surface of the triangular gnomon mark the Declination of the Sun. There are two scales here, with a small overlap region near the center of the Gnomon where both scales co-exist. The scale towards the lower part of the gnomon is used for measuring the Declination from the spring equinox to the autumn equinox – the summer months. The scale on the upper portion of the gnomon is used to tell the declination of the Sun from the autumn equinox to the spring equinox.

How is the Declination measurement done? One observer climbs onto the steps of the gnomon and holds out a stick or a pen projecting perpendicularly outward from the surface of the Gnomon – on the western side of the instrument in the morning hours and the eastern side of the instrument for the afternoon. The location of this projection, should be adjusted along the scales of the gnomon in such a way that the shadow of this projection fall on the quadrant edge – on the Northern edge for the winter measurements and the southern edge for the summer measurements. The reading on the gnomon scale under the stick or pen, when the shadow falls on the appropriate edge of the quadrant, then gives the declination of the Sun.

The shadow of the rod swinging along the circular scale on the dial plates, tells the time. The dial markings are equally spaced, as the shadow moves equal distances in equal time intervals, in this plane. The Sun shines on the Northern side of the instrument from the spring equinox to the autumn equinox, while it shines on the southern side (which, currently has a much smaller scale etched on it, compared to the Northern side) from the autumn equinox to the spring equinox.

Dakshinottara Bhitti Yantra would usually have been the first instrument that might have been built at any of the Jantar Mantar observatories, before all the other instruments were built. Using a large Dakshinottara Bhitti yantra, the latitude of the location could have been very accurately determined, using Meridian Altitude observations of the Sun and ephemeris calculations of the Declination of the Sun for that day. The measured latitude of the location would then be needed for the construction of all the other instruments.

The Dakshinottara Bhiiti Yantra is built in a wall structure placed exactly in the North-South plane, as in the two instruments here at the observatory. (The panoramic view above, has a distortion which makes the plane of the two walls appear to be not parallel).

There are small rods projecting perpendicularly outward from the wall at the top of both the scales. The shadow of these rods swings along the scales during the late morning hours, until the solar noon, after which, the active shadow disappears from the wall.

The instrument can measure the Meridian Altitude and equivalently, the Meridian Zenith Distance at noon time.

The Altitude (angular height) of the Sun at noon time when it crosses or transits the Meridian (a North South arc passing through the Zenith, in the sky), is the Meridian altitude. The Zenith distance being the complimentary angle to the Altitude will just be 900 – Altitude and perhaps does not need a separate scale to itself. However, the two Dakshinottara Bhitti at Varanasi have two separate scales for the Altitude (Unnatamsa) and the Zenith Distance (ntamsa).

The missing segment is a rod (or a sighting tube with a very small hole through which a star could be sighted) which should be pivoted through the central hole in the rod shown above, in such a way that the tips of rod could move along the scales on the circumference of the ring or the Chakra in the instrument.

Once this part of the instrument is in place, using the movement of the whole ring about the polar axis and the movement of the sighting tube about the perpendicular axis, a celestial object can be sighted. The rim of the circle has divisions that indicate the Declination. The Declination markings in the Chakra Yantra at Varanasi, have a least count of 15 arc minutes, with larger subdivisions of a degree and six degrees also present.

The plate around the polar axis pivot has divisions with a least count of 1 degree (with larger divisions of six degrees are present) that indicate the Hour Angle.

The plate around the polar axis pivot has divisions with a least count of 1 degree (with larger divisions of six degrees are present) that indicate the Hour Angle.

Once the celestial object is sighted, the position of the sighting tube on the two scales can be used to read the Declination and Hour Angle.

The Digamsa Yantra is for measuring the Azimuth of a celestial object. The instrument is essentially two concentric cylinders, with markings along the rim of the cylinder corresponding to 360 degrees of Azimuth. The central platform has a pole and a rope stretched from this pole to the outer rim and aligned along the shadow of the Sun or towards a night time celestial object can give the Azimuth of the object.

In the image above, a thin rope has been tied to the central pole, and the other end of the rope is left to hang over the scales on the circumference of the inner circle. The position of the rope is adjusted such that the rope and its shadow lie along the shadow of the central pole. The Azimuth of the Sun can then be determined from the scale markings on the rim.

Similar procedure can be done also with the outer wall circumference which would give better accuracies due to its size. The outer wall could be used when the shadow of the central pole overflows beyond the inner cylindrical wall.

Back to the main Jantar Mantar page